A focus on the main employment contracts in France.

Home » The different types of employment contracts in France

In the French labor market, several types of contracts co-exist. Let’s take a look at them together:

By definition, this contract does not specify the date on which it ends.

A permanent contract can be concluded on a full-time or part-time basis. The working hours (weekly or monthly) are specified in the contract.

A fixed-term contract (CDD) is a contract between an employer and an employee, concluded for a limited period of time in order to carry out a specific task, for one of the reasons authorized by the law. It ends either on the fixed date or in the absence of a precise term when the purpose for which it was concluded is achieved (return of the replaced employee, end of the season, etc.).

It must be written. Regardless of the reason for which it is concluded, such a contract may not have the purpose or effect of permanently filling a job related to the normal and permanent activity of the company.

When is it possible to hire under this type of contract?

The employee is entitled to an indemnity at the end of the contract, known as the precariousness bonus, when the fixed-term contract comes to an end and is not followed by a permanent contract. It is equal to at least 10% of the total gross remuneration paid during the contract. This percentage may be limited to 6% by an agreement or an extended collective branch agreement in exchange, in particular, for privileged access to professional training.

The conclusion of a temporary employment contract is only possible for the execution of a precise and temporary task limited in time, called an assignment, and only in the cases listed by law.

Temporary workers are entitled to compensation, notably linked to the precariousness of their employment. This allowance is equal to 10% of the total gross salary received. They also receive a compensatory allowance for paid vacations.

The apprenticeship contract and the professionalization contract

The apprenticeship contract and the professionalization contract are alternating work contracts, with a period of training and a period of activity in the company. Their similar objective is to obtain a professional qualification for the employee.

The single integration contract (CUI) is an employment contract concluded between an employer who will receive financial aid, and an employee who will benefit from professional integration aid. It aims to facilitate the hiring of people who have difficulty finding a job.

The duration of the CUI is in principle limited to 24 months, unless otherwise stipulated by law.

The employment contract can be a permanent or temporary contract, and the weekly working time must be at least 20 hours. 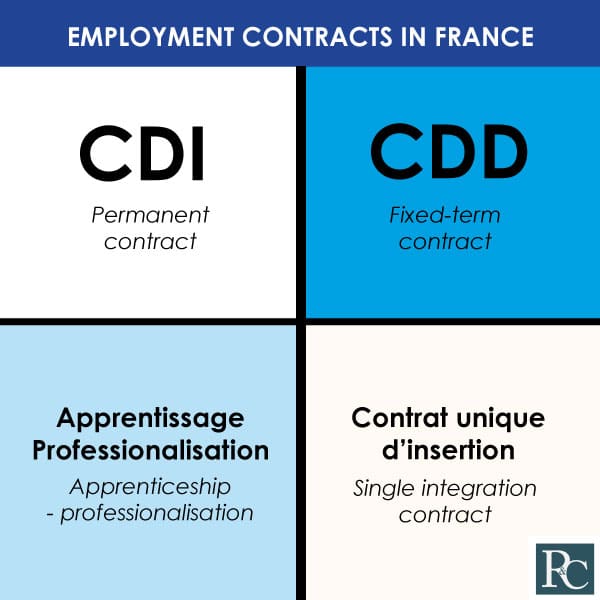 The different business entities in France – Starting business in France

Déborah Zerbib has several years of experience in the field of personal and international taxation after a Master II specialized in Tax Law.